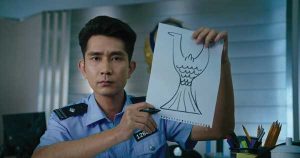 A mermaid falls in love with the ruthless entrepreneur she is supposed to kill.

Xuan’s estate project involving reclamation of the sea threatens the livelihood of the mermaids who rely on the sea to survive. She is dispatched to stop Xuan and this leads them into falling for each other. Xuan plans to stop the reclamation before it is too late…

This is a fabulous Bondesque, aquatic reimagining of Hans Christian Andersen’s ‘The Little Mermaid’ as a broad apologue for environmental negligence.  Having said that, unlike Michael Moore, he has decided to use humour as a means of getting the message across.  Whether or not this works is yet unknown, but it does make the subject matter more palatable for the audience.

Interestingly, China is the world’s leading emitter of greenhouse gases and its rapid industrialisation has been accompanied by massive carbon emissions, the heat-trapping pollution that is causing global warming.

The film opens with a local buffoon leading a tour through his museum of aquatic oddities.  This culminates in the pot-bellied guide lying shirtless in a bath tub with a wig on his head, garishly applied make-up and his legs encased in a rubber fishtail pretending to be a mermaid! Thus we have the ground work for the rest of the film.  If you like zany, then this is the film for you.  It is quite a spectacle …. 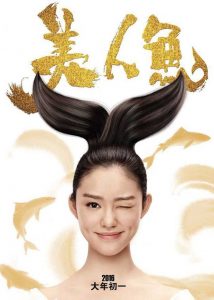 Liu Xuan, (Deng Chao) is a wealthy realtor whose latest money-making scheme involves a sea reclamation project for which he will use explosive sonar technology to rid the area of its native inhabitants—the Merpeople.  With no other options, they send Shanshan (Lin Yun billed as ‘Jelly Lin’) to terra firma to impersonate a human in order to gate-crash one of Xuan’s parties and kill him.

A lot of funny scenes follow, especially when things start to go radically wrong and Shanshan’s uncle, Octopus (Show Luo) decides to take matters into his own hands (tentacles).

Jokes are usually lost in translation but somehow Chow manages to transcend the language barrier and having to read sub-titles by the clever use of direction and camera work.  So adept is he, that had he made a silent film, the humour would still leave an impact.  The camera speaks in a language that the audience will understand, whatever their nationality.

Great performances all round – this is a fun film and whether or not you like watching sub-titles, please go make the effort to see this.  You will not be disappointed.