Curated and produced by Eva McGaw and Tatiana Palinkasev

Albany Arts Communications is delighted to announce Full Circle: The Beauty of Inevitability, an exhibition of recent works by the acclaimed Russian artist GeorgII Uvs.

This exhibition – his first in the UK – is comprised of four series of oil paintings. Created in Malta between 2014 and 2017, the works, entitled ‘Mesozoic’, ‘Genesis’, ‘Code’ and ‘Wings’, symbolise an immersive panorama of the cycles of life.

Uvs’ vision of the world is grounded in science, notably geology and mathematics. Drawing on these disciplines, he offers the viewer a journey from the Mesozoic era, to Genesis and the creation of life, to the codes that embody intellectual development and knowledge, and, finally, to Wings, which reveals the return to a state of unfettered liberation and freedom. Through his fascination with mathematics, Uvs gives meaning to arithmetic as ‘Renaissance’, algebra as ‘Post-Impressionism’ and to high mathematics as ‘Abstraction’.

This fusion of scientific pursuit and artistic imagination has led Uvs to experiment with different single pigments and mixed ultraviolet reactive pigments. In doing so, he has pioneered a new approach to abstract art, a process that brings phenomenal significance and intense substance to his ever-changing works.

Uvs’ artistic practice has been developed and refined over four decades. His vibrant compositions appear to be created instinctively yet are, paradoxically, meticulously planned. Paint is poured onto un-stretched canvases laid horizontally on the studio floor. Uvs makes no direct contact with the paint but manipulates it with different tools from behind. Once his compositional objectives are achieved, he introduces an element of chance, allowing the artwork to interact with the environment. It is this technique, above all else, that defines Uvs’ artistic vision: the collision of art and nature.

The assembled works (some of which, due to the viscosity of the paint, take up to four years to dry) bring to mind geological formations in some and in others, galactic explosions. When the works are exposed to ultraviolet light, as they will be for this exhibition, they reflect the turbulence of the artist’s emotions and energy through the vivid colours and the physical action of his working process. Ultimately, Uvs’ works strive towards beauty, transmitted through their texture, composition and colour.

With special support from Liz Brewer

About GeorgII Uvs:
GeorgII Uvs (b. 1954) began painting at the age of 17. After graduating with a degree in Geology from Moscow State University, he pursued his second degree in Fine Arts. His attitude to art is an integral part of his being, a channel to express his emotions and transmit his energies. For Uvs art is a dialogue with the environment, nature and people. His style and focus changed when he moved to Malta, when his works became more abstract, and he crystallised his artistic energies into the four series of paintings to be shown at Saatchi Gallery.
www.georgiiuvs.com

About the curators:
Eva McGaw has been actively involved in the art world since the early 1990s. She has pursued her passion by supporting Eastern European artists through commissioning and producing exhibitions. She lived in the Middle East for over 17 years, where she worked as a special representative for Sotheby’s.

Tatiana Palinkasev began her career at Christie’s auction house in London and further worked in their Madrid and Rome offices. After valuable experience gained at the auction house internationally, Tatiana co-founded Callisto Fine Arts, where she focuses on curatorship and exhibitions.
Together, Eva and Tatiana established Metamorphosis Art Projects, where they produce and curate art exhibitions with a special edge. They create extraordinary experiences to motivate artists in developing new forms of expression, helping them to communicate their innermost convictions to inspire their audiences. Interaction and inspiration are the key elements of their exhibitions. They look for special, out of ordinary elements to achieve extraordinary exhibitions. 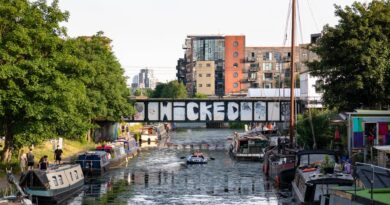