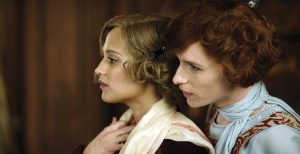 The remarkable love story inspired by the lives of artists Lili Elbe and Gerda Wegener. Lili and Gerda’s marriage and work evolve as they navigate Lili’s groundbreaking journey as a transgender pioneer.

Adapted by Lucinda Coxon from David Ebershoff’s novel, Tom Hooper’s film retells a true-life story which was inspired by the lives of Einar (Lili) Elbe (Eddie Redmayne) who is married to Gerda Wegener (Alicia Vikander).

The film is set in mid-1920s Copenhagen where Einar is making a name for himself as an artist.  His wife, Gerda, also an artist, is less renowned and works as a portraitist of prominent wealthy citizens. To all intents and purposes they enjoy a strong and loving marriage, although a touch of angst would appear to be ‘rearing its head’ since Gerda is finding it more and more difficult to sell her paintings, whilst Einar enjoys continued fame.

One day, in order to keep to a deadline on a portrait of a ballerina, Gerda asks Einar to model the dress for her so she can finish the painting.  On seeing him in the dress she asks him if he can add the stockings and shoes so that she can better visualise the positioning of the legs and feet. He reluctantly agrees, but immediately you see the transformation within him.  His whole being becomes imbued with the feeling of finally finding his true self and empowering him to do so.  Gerda is thrilled with her new ‘muse’ and finds that her creative juices are starting to flow, once again.  It is she that suggests that perhaps Einar should go out in public and attend a soirée with her as ‘Lili’ – and thus ‘Lili’ is born ……

Gerda’s work takes on new meaning as her paintings of ‘Lili’ start to attract attention.  She is advised by a prominent art dealer that she should move to Paris, to which Lili reluctantly agrees. Whilst Gerda’s career flourishes, Lili can reveal her true self and finally live her life as a woman and all would appear to be going to plan – until Lili acquires an admirer (Ben Whishaw) ……. and eventually undergoes a pioneering gender confirmation operation.

Danny Cohen’s cinematography sets the exquisite tone of the film from the very beginning with a series of atmospheric painted landscape shots that turn out to be paintings by Einar Elbe.  The rich, sumptuous fabrics are almost tangible and the colour palette is vibrant and warm.  The Art Deco interior scenes are a joy to behold (being my favourite fashion era).

Eddie Redmayne, is bound to attract a lot of Awards attention for another transformative role, following his great success as Stephen Hawking in The Theory of Everything.  He is credible as Lili and his soft but well defined features lend themselves to this part and he appears to revel in the process.  He is in turn coy and flirty, yet always aware of being caught out.

Alicia Vikander is stunning and a delight to watch, although her English accent, as in Testament of Youth is a little stilted and mannered throughout.  But nevertheless, a very watchable performance. 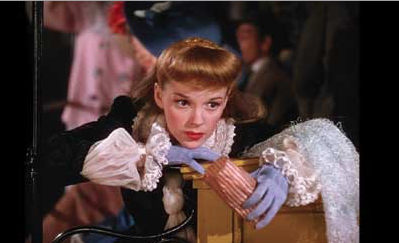