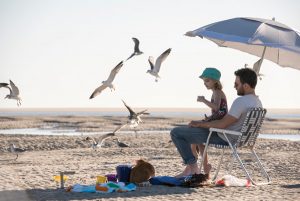 A single man is left raising a child prodigy.

Mary is a child prodigy who has yet to be unleashed on an unsuspecting world until her teacher, Bonnie (Jenny Slate) discovers her extraordinary mathematical abilities.  Wasting no time to inform the school’s principal, Gloria Davis (Elizabeth Marvel), Frank is offered the opportunity for Mary to be educated in a school for gifted children, with a full scholarship. 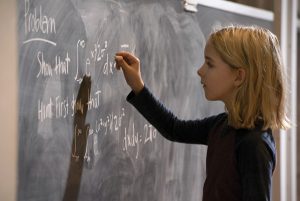 However, Frank is intent on Mary leading a normal life and turns down the generous offer.   But Frank’s wealthy mother, Evelyn (Lindsay Duncan) has other ideas and her plans threaten to separate Frank and Mary.  Meanwhile, Frank’s landlady/friend, Roberta (Octavia Spencer) can only standby and watch as the drama unfolds around her surrogate family.

The cinematography (Stuart Dryburgh) is beautiful – especially the scene where Frank and Mary are on the beach, having a philosophical banter, silhouetted against the setting sun.  Simply stunning …

All the performances are terrific and Octavia Spencer and Lindsay Duncan are a treat to watch.  The film could have fallen foul of many a cliché, but the two leads, Mckenna Grace and Chris Evans have such delightful, tangible chemistry that you believe they are actually related, especially when the banter between them is so natural and seemingly unrehearsed. There are heartstring tugging moments, such as the scene where a hysterical Mary is being forced to leave her uncle to live with foster parents – but Mckenna takes it all in her stride.  She is indeed ‘gifted’ – as an actress.  We are going to be seeing much more of her and those fabulous thick, dark eyelashes of hers!!

Chris Evans is cast in a role which enables him to divest himself of his Captain America mantle – temporarily, I am sure.  His performance, like Mckenna’s, is understated and to good effect, as the emotionally driven, Frank.

Mckenna Grace and Fred, the monocular cat, steal the show!

Another ‘must see’ film. 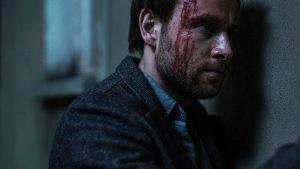 Based on the book of the same name, this psychological thriller sees an Australian photojournalist become trapped by an obsessive schoolteacher, following a one night stand.

A riveting psychological thriller based on Melanie Joosten’s 2011 book of the same name.

After spending a passionate night together at his home, which is in an otherwise deserted apartment complex, (alarm bells should have gone off there) she wakes up alone.  On trying to leave, she realises that she has been locked in and the windows are all secured.   When Andi returns later that evening, she confronts him, only to be told that he had left a key for her on the side.

But the next day, finding herself locked in again, she tries the key only to find that it does not fit.  It soon becomes horrifically apparent that her inability to escape is part of a larger scheme which Andi has in mind and that her nightmare is only just beginning.  She will need to use all her feminine wiles if she has any hope of escaping her confinement 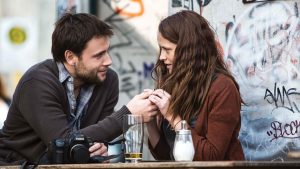 Elegantly constructed and deeply suspenseful, Berlin Syndrome is both a nuanced character study and an engrossing thriller that explores the dynamics of power and control, and the psychological complexities between captor and captive. Exhilarating, nerve-wracking and unforgettable, it finds Cate Shortland at the peak of her powers.

This is the third feature film of Australian director, Cate Shortland, and depicts the captor/captive dynamic in explicit and sometimes very uncomfortable detail.  She is definitely a talent to watch.

There are two fine performances from the lead actors; this could well be Teresa Palmer’s defining breakthrough role and she is perfectly cast as Clare – being able to face the camera bare-faced and yet holding our attention with her sad, smoky eyes, all the while conveying mystery and trauma.

Max Riemelt’s, Andi, is cool, calm and emotionless, at times needy, but also menacing.  His only interest is the subjugation of his ‘prisoner’.

Interesting hand-held camera work from the cinematographer, Germain McMicking, although at times, quite unnerving.

I have to say I was never bored and my eyes were riveted to the screen.

There is a lesson to be learned, however – beware of handsome young men bearing gifts of strawberries … and ‘huffing and puffing’ recliners … that should keep you guessing. 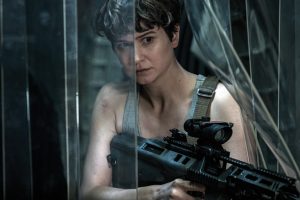 The sixth instalment in Ridley Scott’s Alien series follows colony ship Covenant on its mission to populate a remote planet, where paradise doesn’t turn out as expected.

Eleven years have passed since the ill-fated Prometheus mission and this time, the Alien’s food supply will be the crew of the Covenant, a ship which is carrying 2000 hyper-sleeping colonists to a new planet.  Walter (Michael Fassbender) a next-generation android, takes care of on-board maintenance, until a freak incident awakens the crew members.  All survive (just about) apart from the Captain who is unable to escape from his sleep pod.  His wife, Daniels (Katherine Waterston) unable to face the pity of her shipmates, finds it easier to turn to Walter.

The crew pick up a signal (John Denver’s fragmented strains of ‘Take Me Home, Country Roads’) and pinpoint it to a nearby, seemingly habitable planet.  On arrival, they encounter Prometheus’s sole survivor, David (Michael Fassbender in duplicate), the British-accented android and they come –face-to-face with the Neomorph. 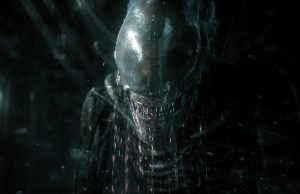 There is a slight twist to the ending, although I had an idea but I didn’t quite guess the absolute end.

Michael Fassbender’s performance glides effortlessly between the two identical androids.  Walter being the unassuming, getting on with the drudgery and David, the more cocky and assured.

Guy Pearce (uncredited) plays Peter Weyland, the billionaire entrepreneur and inventor, and the founder and CEO of Weyland Corp who in 2089 agrees to fund a scientific expedition to the moon, LV-223, at the request of Drs Elizabeth Shaw and Charlie Holloway.  Unfortunately, he only appears in the opening scene – such a shame, since he is a very watchable, multi-talented actor.  I guess someone had their reasons …

Katherine Waterston plays the Sigourney Weaver role, but pales in comparison.  However, that is not to say that she was not good – it is just that Weaver’s role will remain at the forefront of everyone’s mind, whenever ‘Alien’ is mentioned.

Although past crew members have long become Alien fodder gone to that alien-domain-in-space, never to return again, this film has all the previous scare-factors; face-huggers; bursting torsos, dominant female at the helm to name but a few and, of course, the jaw dripping, teeth sharpened Xenomorphs have now been replaced by Neomorphs.

John Denver appears to have gone through a resurrection – much like Alien – since being dragged from his eternal slumber for ‘Free Fall’ but I’m not complaining.

This is the sixth film in the series (and the second of four intended prequels) and I am wondering just how many more can be eked out of this science-fiction horror franchise.  As long as there are ‘bums on seats’ and dollars at the Box Office, I guess they will keep churning them out …

Not impressed, I never seem to be able to follow the convoluted storylines (much like Star Wars) but I thought the opening scene was terrific – very un-Alien-like.

MY LIFE AS A COURGETTE (MA VIE DE COURGETTE)

An orphaned young boy attempts to adjust to his new life in a foster home.

Oscar nominated, ‘Courgette’ lost out in the Best Animated Feature this year to Zootopia.  Such a shame, since this is a beautiful and beguiling stop-motion animation, adapted from the 2002 novel, ‘Autobiography of a Courgette’ by Gilles Paris.

The film centres round a young boy, Icare (Courgette) – voiced by Gaspard Schlatter – who lives with his alcoholic mother.  His only solace is flying his kites and presumably this is a metaphor for his name – translated, ‘Icarus’ who in Greek mythology, along with his father, Daedalus, attempted to escape from Crete by means of wings that his father constructed from feathers and wax but with a severe warning – not to fly too close to the sun.

After a terrible accident at home, he is taken to a children’s home in the country where he is introduced to a motley crew of children, each with a grim story to tell.  Courgette finds it difficult to integrate, especially since one of the boys, Simon (Paulin Jaccoud) is intent on giving him a rough ride, but patience and perseverance (on Courgette’s part) win the day.  At the same time, he finds himself drawn to Camille (Sistine Murat) whom he recognises as a kindred spirit.

But help may be at hand, in the guise of the lonely, unhappy policeman who dealt with Courgette’s case, Raymond (Michel Vuillermoz).

This is director, Claude Barras’ feature debut and what an entrance – this is a   tender and empathetic, French-Swiss stop-motion animation with emotional depth.

Ludovic Chemarin, Art Director, has created beautiful colourful visuals together with expressive and subtle characters, whose adorable faces are a cross between the illustrations of Charlie Brown by the legendary Charles Schulz and the paintings of Margaret Keane’s saucer-eyed waifs.

Last, but certainly not least, here is another delightful soundtrack, courtesy of Swiss singer-songwriter Sophie Hunger (watch out for the heart-breaking tune that plays over the end credits).

This is one film I wouldn’t mind seeing a sequel of.  Who knows?  Definitely not a film to be missed. 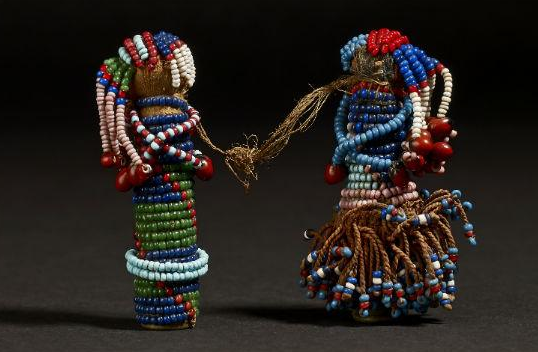