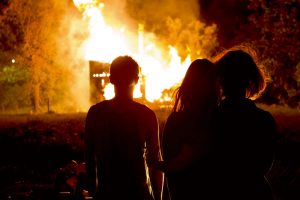 A single mother is swept into a dark underworld, while her teenage son discovers a road that leads him to a secret underwater town.

This is Ryan Gosling’s directorial debut and he also wrote the screenplay.

Lost River was first shown at the Cannes Film Festival 2014 where it was almost universally panned. However, I didn’t think this film was all bad. I think it is worth viewing if only for the amount of ‘dissenters’ or if you harbour any fantasies for the cast (which I don’t). I like a little bit of ‘menace’ now and again and this film was pregnant with it. I was reminded of Blue Velvet (David Lynch) and Only God Forgives (Nicolas Winding Refn) both very strange, eerie films… so, if you are fans of either of these directors, then I am sure you will be able to sit through the film without twitching… but there again… The central performances were all good with special mention for Ben Mendelsohn, who plays a sleazy lowlife and Matt Smith, a vengeful skinhead (you will probably recognise him as the Eleventh Doctor in the BBC sci-fi series Doctor Who) – both roles being totally abhorrent in different ways… Watch out for the rat… Twitch Factor: Zero